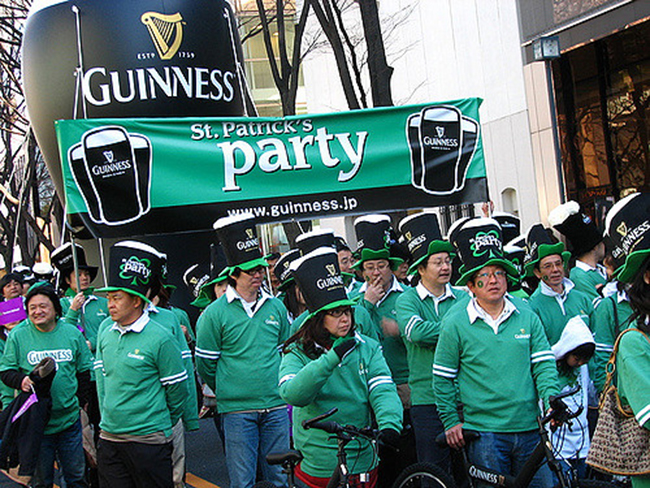 St. Patrick’s Day, the commemoration of the death of the patron saint of Ireland, is celebrated in more countries around the world than any other national festival, and Japan, is of course, no different. As a day in which the abstinence restrictions of lent are temporarily lifted, it has, particularly in North America, been commonly associated with drunken revelry, however here in Japan, that is a side of the proceedings you can either take or leave, depending on where you go to celebrate. Pop on some green, and take your pick!

A couple of days after the official day of celebration, the St. Patrick’s Day Parade in Harajuku has extra cause for celebration: their 25th anniversary. The biggest Irish event in Japan, it started in 1992 for the purpose of introducing Ireland to Japanese people, and sees the Omotesando avenue closed off to allow the parade to march through between 13:00 and 15:00. You can either go along to cheer on the array of green-garbed celebrants, including banners, pipers and a healthy smattering of leprechauns, or if you want to get involved in the actual parade itself, you can sign up to take part as a volunteer. The volunteer’s meeting takes place on March 3, details of which can be found here.

While you are in the area, and you are still feeling a touch of the ‘Oirish’, then you should get yourself down to the I Love Ireland Festival in Yoyogi Park. Taking place over the whole weekend (March 18-19) they will be celebrating 60 years of Japan’s diplomatic relations with Ireland. There you will find face painting, live traditional musical shenanigans, and more than likely a glass of Guinness or two. To get a feel for what you can expect, check out their Facebook page here.

Without wanting to lean on lazy stereotypes, there is something about the Irish and drinking. Wherever I have been in the world, whether it be Gothenburg or Kathmandu, I have stumbled across an Irish bar. In Tokyo, they abound. Here are just a few that you can head to in order to celebrate all things Emerald Isle.

Quite probably the best known of the Irish pubs around Tokyo, Dubliners have branches in Shinagawa, Akasaka, Shibuya, Ibebukuro and Shinjuku. Irish drinks include Guinness, Kilkenny, Magners cider as well as Jameson’s whiskey. The food is more of the standard pub grub, although they do do a full fried breakfast (though no white pudding, so it’s not exactly authentic Irish).

Owned by a regular of the British Embassy Football Club, An Solas is very much a paid up member of the ex-pat community. Some evenings see live celtic music performances in this traditional style pub, as well as the occasional Guinness Seminar. It’s also a great place to watch the rugby, and there are a dozen types of Irish whiskey to choose from.

Considered by some to be one of the better Irish pubs in Shibuya, Failte has been going for over nine years now. As well as the obligatory Guinness, they also have guest ales coming in, and at the time of writing you can try a very decent Marstons’ Oyster Stout (though check their website for more up to date listings). The food is also a bit different than you might expect from a pub, with horse carpaccio and chicken terrine on the menu.

For a fuller listing of Irish pubs in your area, check out the Irish Network Japan listing here.