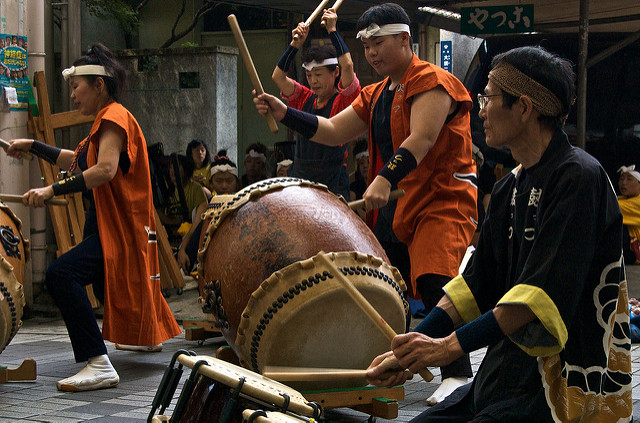 October brings the Nagoya Festival, a massive parade throughout the city celebrating three great warriors and historical leaders connected to the city: Oda Nobunaga, Toyotomi Hideyoshi, and Tokugawa Ieyasu. However, this is by no means the only – nor even the most interesting – of the festivals celebrating the city’s great history this month. Another festival that is well worth checking out, though something of a far cry from the great leaders of Japan, is the Osu Street Performers’ Festival in Nagoya’s shopping district of Osu.

While today Osu is best known for it’s Buddhist Temple and broad, eclectic collection of unusual clothes stores and boutique restaurants, the history of Osu is something a little bit different.

During the Edo period, ‘yūjo’ (literally ‘women of pleasure’) and brothels were restricted to ‘yūkaku‘, a closed-off area reserved for the sex trade, a red light district as we know it today. In Nagoya, that area was what we now call Osu. As these yūkaku flourished, as well as being home to the city’s sex workers, they grew to include all manner of recreation activities, from fine dining to theaters to shopping and street performance. It is these entertainers from Osu’s 400-year history that are celebrated today.

Osu Street Performers’ Festival, What is it?

While there are many street performers’ festivals in Japan, Osu’s began in 1978 as the brainchild of actor and inventor of Rock Kabuki Tomohiko Hara, as an alternative to Nagoya’s main festival, allowing Osu to claim to being the oldest. Today some 350,000 people visit the festival over the weekend to see around 250 street performers, musicians and artists show off their skills, up close and personal at 18 fixed venues in and around the arcade, plus roving performances that move through the arcade.

The highlight of the festival is the ‘oiran’ parade. The oiran were members of the sex industry, however, unlike the regular yūjo these were the highest grade of courtesan, proficient in traditional Japanese arts and able to converse with wit and authority in all manner of subjects. Oiran were a precursor to the now more famous ‘geisha’.  Accordingly, they were well paid (an evening with a one of the top oiran costing somewhere in the region of a shop worker’s monthly salary), and thus ornately dressed. And it is this dress that makes for such a spectacle as modern-day oiran (who maintain the artistic side of the job but eschew the sexual aspects) are paraded through the Osu arcade seven times during the festival, a remembrance of times gone past.

The festival itself is particularly good fun for all family members, from children to adults, and of course, there is plenty of good food, with many yatai food stalls on top of the great selection of eats that Osu already has on offer.

This year, on the eve of the festival, there will be a ‘zenyassai’ – essentially a pre-party that focuses more on the local residents – that will see a tie in with the rugby world cup, with two local teams  competing in a rugby-themed event (at the time of publication, details are yet to be confirmed).

Perhaps most excitingly of all, 2019 is the first year that applications to be one of the oiran paraded through the arcade have been opened to non-Japanese residents of Nagoya. So if you, or someone you know, fancy being made-up and paraded, then check out the details here. Applications close on September 28, Japanese ability not required.

Need more reasons to go? Check out our  ‘getting to know you: Osu’ guide.