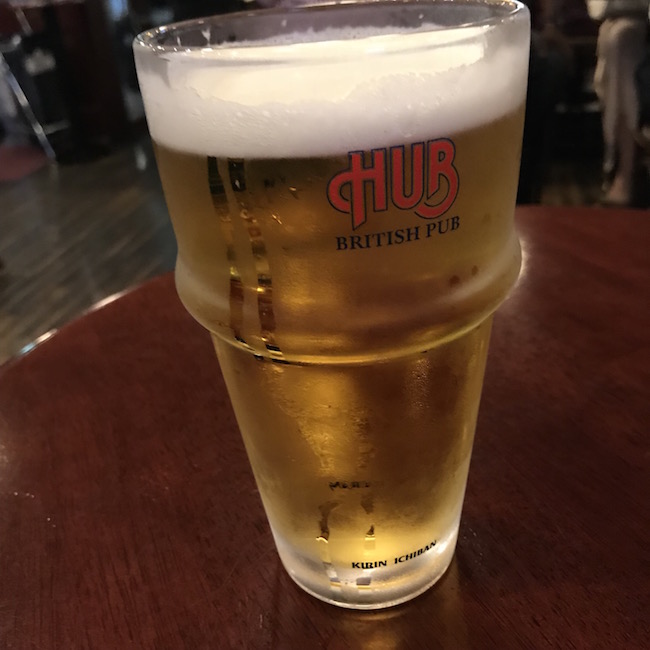 Hence the draw of the ex-pat bar. Whether living short-term in Nagoya, here for an extended period or settling in for life; the ex-pat bar can be something of a lifeline for people who share a cultural background (there is no way that ‘Cheers’ reference would have flown in my local izakaya).

There are a number of ex-pat bars in Nagoya, all with their peculiarities and good points, and having lived in Nagoya for a good seven years now, I know them pretty well. Too well, if you ask my wife.

Here are the ins and outs of some of the more popular gaijin bars in Nagoya.

The Hub is probably the biggest chain of British Pubs in Japan, and there are four of them in Nagoya. With bog-standard ‘pub-grub’ fish and chips and shepherd’s pie accompanied by more Japanesey fare such as octopus carpaccio, it’s fair to say that the food is less a reason to come than their pints of cocktails for just 270 JPY at happy hour (16:00/17:00-19:00). The Sakae branch is perhaps the most famous (or should that be infamous? [Editors note; infamous is correct] ) as the ‘party Hub.` Open until the smallest hours on weekends; this is where Nagoya’s foreign community ends up when things are dead everywhere else.

There are two Hubs in Meieki. The original one, near Dai Nagoya Building (the one that I frequent), is pretty chill; though it gets busy on weekends as people drop in for post-shopping drinks. The one near Winc Aichi is good for non-smokers, as the smoking section is segregated at the back. Fushimi Hub is the quietest of the four, but as the location of choice for supporters of the Nagoya Grampus soccer team, it gets pretty raucous on match days.

Another British theme bar, Elephant’s Nest in Fushimi is perhaps the most like a proper British pub that I’ve seen in Japan, in that it is a bit rough round the edges and could do with a lick of paint, but that adds to its charm in my opinion.

There are a couple of dartboards, and they’ve got decent beers on draft including Guinness and Strongbow cider, the latter of which certainly makes me feel at home. Once a month they hold meetups with Japanese and ex-pats where you can practice your Japanese language skills, and every quarter there is the ever-excellent Nagoya Pub Quiz. I won it once, you know. Perhaps my proudest ever achievement.

Something of a regular haunt for us at Japan Info Swap Towers, Coat of Arms has all sorts of foods sourced from the nations that comprise the British Commonwealth, as well as even further afield, but it is the poutine – french fries topped with aged cheddar cheese and a light gravy – that is the pick of the bunch.

It’s also a great place to watch sports (it was where I spent my entire soccer World Cup), and as smoking is only permitted on the veranda, you can actually taste your beer, which is something of a novelty in Japan.

Previously known as Red Rock (as it always will be called in my head), this is Nagoya’s premier Aussie theme bar, and of course, if there’s one thing that Aussies know, it’s drinking.

The Rock is one of the mainstays of Nagoya’s scene and has been for over fifteen years. They make a great selection of cocktails, there are many beers on draft, and the adventurous can dine on crocodile and kangaroo. My recommendation is their authentic Aussie pies; the best I’ve had in Japan.

Images: by Mark Guthrie (Own work)