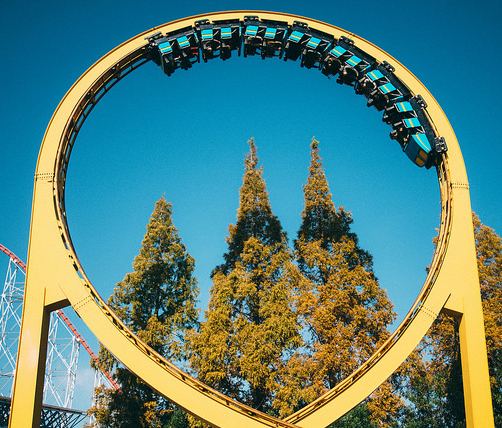 The most widely known amusement parks in Japan are of course Tokyo Disney Land and the Universal Studios Japan near Osaka, but did you know that after those two behemoths comes a resort that is right on our doorstep? Well, of course you do. You read the headline to this article!

But yes, Nagashima Spa Land in Kuwana on the border of Mie and Aichi, is the third most visited amusement park in the country. In fact, with approaching 6 million visitors a year it is the 19th most most attended attraction in the world.

The greatest draw is the main amusement park itself. Second only in size to the immense Fuji-Q, there are around forty rides and rollercoasters to raise the pulses of even the most hardened of daredevils. The daddy of them all is the Steel Dragon 2000 that, in its year of completion at the turn of the millennium, held the world record for speed, height, and track length (the so-called ‘triple crown’), the latter of which it still holds today. Other rides of note include the White Cyclone, the largest wooden roller coaster in the world and one of only five in Japan, as well as one of the Largest Ferris wheels in the country. 2015 saw the arrival of the Acrobat, a ride in which thrill-seekers lie down giving a ‘flying’ sensation, and at 1,021 metres is one of the largest roller coasters of this type in the world.

Alongside the roller-coasters and rides is Joyful Water Park. Only open in the summertime (for obvious reasons) this open air water park is as filled to the brim with rides as its dry land neighbor. In fact it is so jam-packed that it is credited as being the densest – with more rides per meter – in the world. There are eight slides including tunnels, rafts, and the frankly terrifying banana slingshot ride that has to be seen to believed. As well as the rides there are three main pools including a wave pool and a hot onsen pool. Be warned though, on summer weekends it can get pretty packed with people, and it is imperative that you cover up any tattoos.

Speaking of onsen pools, in Nagashima Spa Yuami no Shima they have one of the largest onsen complexes in western Japan. There are many types of baths that you can enjoy – hot, cold, warm, herb, Jaccuzi, even an electric bath with a mild current pulsing through the water! After a soak you can indulge in a shiatsu massage or dine at one of the restaurants. There is a hotel attached to the onsen, but access to the pools is not solely restricted to hotel guests.

Just outside of the Joyful  Waterpark is Mitsui Outlet Park Jazz Dream Nagashima. This outlet shopping mall has many international stores, from Moschino to Armani, from Timberland to Nike. Most stores are discounted from regular high street outlets, and during lunchtime many of them offer special reduced prices, so it may be worth putting off your meal until later. When you do decide to eat there are plenty of places to dine, with Bagel & Bagel being a personal favourite.

If Joyful Waterpark is a big draw to the area in summer, then Nabana no Sato flower park is the reason that many visitors come in winter. Though it holds one of Japan’s largest flower festivals in the summer, it really comes alive in the colder months with a breathtaking illuminations display. Highlights include a light tunnel and a stunning representation of Mount Fuji that reflects the passing of the year on the great symbol of Japan. Wrap up warm and head to the observation deck for the best views of the park.

If you have small children then you will perhaps not escape a trip to Nagashima without a tour of the Anpanman Museum. This attraction dedicated to the adorable character with bread for a head is located just outside the entrance to the amusement park and is packed with all things Anpanman. There are slides, a ferris wheel, people dressed up as characters from the show and, of course, a gift shop.