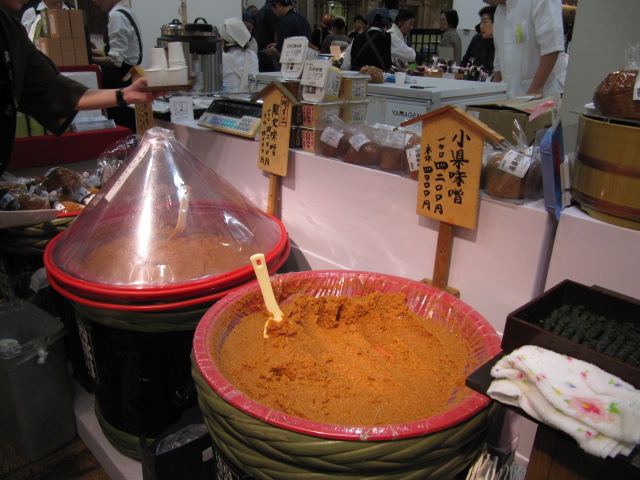 There was a time when miso was only eaten by nobility and monks. It was strictly forbidden for commoners to even eat the fermented condiment. What a difference a thousand years or so makes – today it is the cornerstone of traditional Japanese meals.

Miso was invented in China and first eaten over 2500 years ago. It was originally a paste made of cooked soybeans and fermented grains and spread directly on food. When the foodstuff arrived in Japan it was considered a food of the elite and given as gifts and even used as wages. The first specialty miso shops, decreed by Japanese law, eventually appeared in Kyoto.

Through the ages, the miso soybeans were mashed into a soup that became the go-to food for samurai warriors. Later, as the country dissolved into decades of civil war, the nutrient-rich miso paste was a critical battlefield ration. During the Edo Period from the 1600s to the 1800s experimenting with different methods of fermentation led to high-grade miso favored by the wealthy merchant class and everyday varieties for the masses. Miso shops with increasingly complex recipes sprang up across Japan to satisfy all these needs.

The art of creating miso involves a mastery of fermentation and aging. The fermentation of the soybean paste uses salt and takes place when the weather is hot. When the temperatures drop, the fermenting enzymes slow and undesirable bacteria die off. The miso is ready for market at this time but not all miso is consumed after this process. The fermentation cycle for some miso is repeated in the second year and even a third year. Repeat fermentation cycles result in richer flavors and thicker textures for these “two-year” misos and “three-year” misos.

All of the one-year miso is considered “light miso” which is also known on menus and store shelves as “sweet miso” or “mellow miso.” The single cycle of fermentation means less salt. The mild flavor is also exacerbated by an increase of cooked rice or grain in the mixture. “Dark miso” covers the miso made over multiple years and can include rice, barley, soybeans or buckwheat.

In Japanese culture, the solid ingredients in miso soup are added based on the season. It is not unusual to find miso soup seasoned with kelp, shrimp, black clams, onions or mushrooms. A traditional Japanese breakfast is miso soup and white rice. The time-honored presentation is for the soup to be served in lacquer bowls, often with lids, and consumed by drinking directly from the bowl.

In today’s healthy food movement, miso has been discovered to be packed with friendly probiotic bacteria. Those beneficial germs can help the body kickstart its immune system. Some studies have suggested that the consumption of miso soup can decrease the probability of contracting stomach cancer and breast cancer.

Those potential health benefits have caught the attention of the world. These days, the traditional staple of a Japanese diet for a thousand years is a popular export and fermented mashed soybeans are shipped across the globe.

By Fooding Around, Crystal, pelican, Kari Sullivan [CC BY 2.0], via Wikimedia Commons