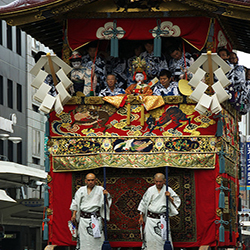 Summertime in Japan is all about festivals, or matsuri, and one of the most popular summer festivals is Kyoto’s Gion festival, known in Japanese as Gion Matsuri. In fact, running through the entirety of the month of July, it is not only one of Japan’s best known festivals, it is also perhaps the longest.

What is Gion Matsuri?

Gion Matsuri dates back to 869AD and is an annual festival held near Kyoto’s famous Gion district, perhaps best known for being the home of Kyoto’s geisha community (known locally as geiko). Though named after the area, most of the Gion Matsuri festivities take place outside of Gion, centring around Yasaka Shrine (formerly known as Gion Shrine), and a string of events are held throughout the month. The most spectacular events drawing the biggest crowds are the two parades called Yamaboko Junko, held on July 17 and July 24.

The Parades of Gion Matsuri

The parades see two types of float, Yama and Hoko, used in procession. There are 33 of these extravagantly decorated Yamaboko (the term for both types) in total, though the July 24 parade does not see all in use. The larger of the two are the Hoko, measuring 25m in height, weighing around 12,000 kg and requiring 30-40 men to pull them through the streets. The smaller Yama are about 6m, average at around 1,400 kg and take 14-24 men.

Riding in the main Naginata Hoko is the ‘chigo’, a divine messenger and the page boy of the ceremony. Prior to the festival this young boy is chosen from Kyoto’s merchant families and spends weeks partaking in special purification ceremonies, isolated from contaminating influences such as the presence of women. He will then be clothed in Shinto robes and crowned with a golden phoenix and carried atop the Hoko – he must not touch the ground from the 13th until the completion of the parade on the 17th – from where he must cut a sacred rope, a shimenawa, for the festival to begin.

The Festive Yoiyama of Gion Matsuri

In the three days prior to the parades, collectively known as Yoiyama, the area bustles with a party atmosphere. In the build up to the main festival on July 17 the downtown area around Karasuma and Shijo is pedestrianised and yatai food stalls line the streets selling all kinds of wonderful foods such as yakitori, takoyaki and taiyaki. People gather in the area to eat and drink together, many of whom, men as well as women, will wear an informal style of kimono called yukata, popularly worn at summer festivals. It is at this time that observant attendees might spot the famous geiko and their apprentice maiko walking through the streets of Kyoto.

The History of Gion Matsuri The festival began over 1,100 years ago as a purification ritual, or goryo-e, to appease the god Gozu Tenno. In 869AD, when Japan was wracked by plague, Emperor Seiwa decreed that people were to pray to the god of Yasaka Shrine, Susanoo-no-mikoto in order to rid the land of disease and pestilence. Whether due to its success or otherwise, this practice was repeated whenever there was a reoccurrence of plague and became a permanent fixture in the Kyoto calendar in 970AD. As the merchant classes increased their influence along with their capital they began to use the festival as a display of wealth and expertise, with the craft guilds building the 12 tonne floats and kimono textile merchants of the Nishijin areas creating exquisite tapestries with which to decorate them, a tradition that remains today.

Follow this link to a Wikipedia page showing the full schedule