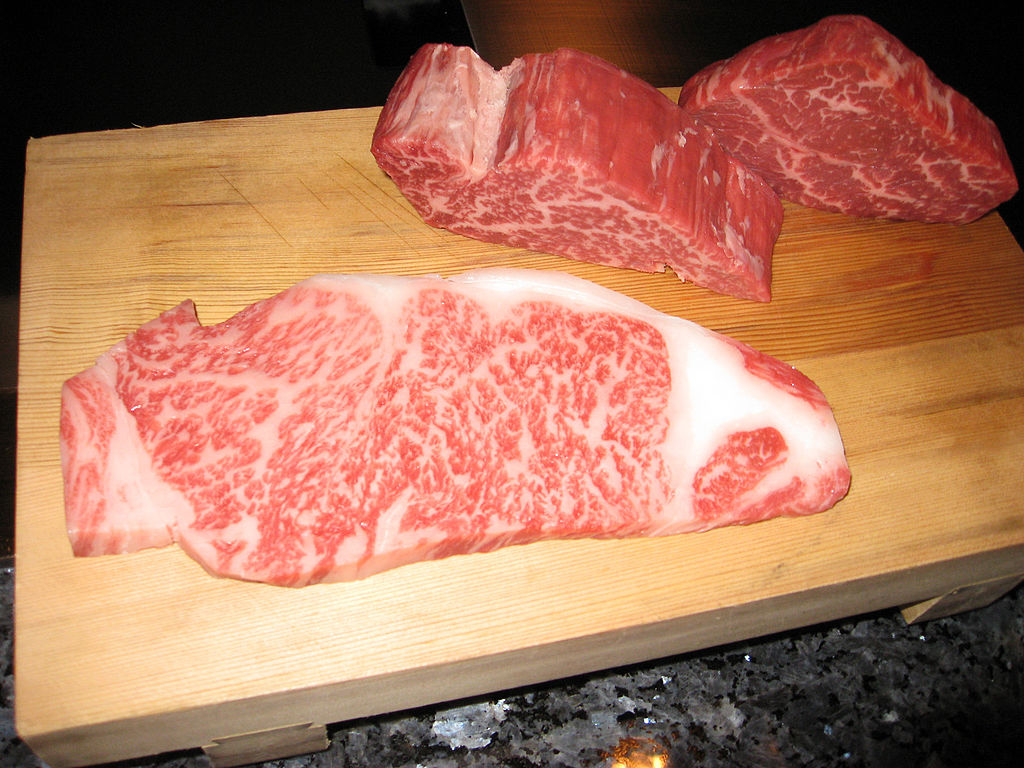 Russia has its caviar, Maine has its lobsters, and Kobe has its beef.

There are no Kobe beef cows. They are a breed of Wagyu cattle that are raised in Hyogo Prefecture. Cattle have been raised in Japan for 2000 years but because of the mountainous terrain of the island country, the herds tend to be bred in small pockets without much intermingling.

What is so special about Hyogo cattle?

The Wagyu cattle in Hyogo have been selectively bred for intense marbling of fat. Modern tastes for beef have tended towards lean breeds of cattle which require less resources to raise. The Wagyu around Kobe are not just given the highest quality grain but are fattened for almost three years as opposed to an American cow that goes to slaughter at 18 months. And to be considered true Kobe beef cattle, the animals must be raised in strict adherence to rules enforced by the Kobe Beef Distribution and Promotion Council.

As a result, the Kobe beef herds number only about 3,000 animals. Since Japanese open land is scarce and expensive, cattle have begun to be shipped to Australia for raising. As long as the rules of Hyogo Prefecture are followed, the Australian-raised cattle can be labeled Kobe beef cows as well.

What is so special about Kobe beef?

The superior marbling of Kobe beef is unlike any cattle breed in the world. The fat is evenly distributed and not present in thick bands. It has an absurdly low melting point of 65 degrees – it will literally melt in your hand or tongue. The sensory experience of eating Kobe beef is so rich that only small flavorful pieces are served rather than plate-filling steaks that most diners are used to eating.

Ever since the Kobe beef phenomenon began gripping the culinary world 15 to 20 years ago mislabeling has been rampant. Very little true Kobe beef is actually exported out of Japan and yet the name appears on menus worldwide. The fraud was especially pervasive in the United States where all beef, including Kobe beef, was banned from the country in 2009 due to a cattle disease outbreak. These days very small shipments are permitted into America. Yet names like “Kobe” and Kobe-like” and “Wagyu” are often attached to beef that is not the real deal.

Where to find true Kobe beef

The one place that consumers can find real Kobe beef is in Japan where every restaurant or meat market must display a 10-digit ID-number that can actually be traced back to the individual animal. Beef sleuths in Japan can track the meal on their plate back to the parents, birthdate, and slaughter date. The Kobe Beef Council even keeps a record of every carcass from the Prefecture on its website.

In Kobe, foodies head to Kobe Plaisir where the menu revolves around the “world-renowned” Kobe beef. Preparation of the steaks is key as mishandling will result in a bland, tasteless meat so on Kobe beef hunts it is important to stick to known quantities. At Kobe Plaisir, diners can enjoy Kobe beef by the slice or in 100-gram rump roasts and filets or 150-gram sirloins. That will set you back 11,400 yen or US$100.