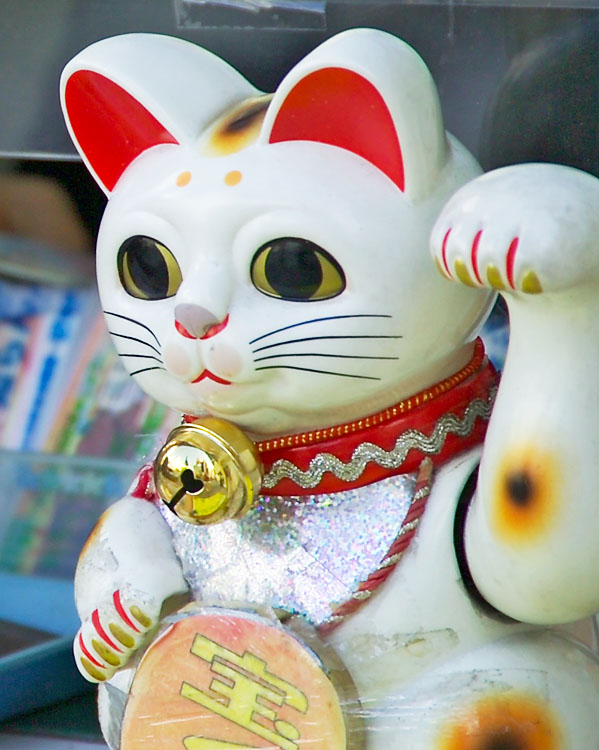 New Year is the main holiday of the year in Japan, and the country shuts down for several days as people take time off to spend time with their families and relax. As with Christmas celebrations in the West, numerous customs and traditions are observed at New Years. Here are explanations of a few of them: Bōnenkai means “forget the year gathering.” These are parties that people hold with friends or colleagues to drink, be merry, and forget the year. The bo-nen-kai season usually starts around the beginning of December, and intoxicated people, typically middle-aged men, are visible on streets and trains on all nights of the week rather than just Fridays and Saturdays.

After the New Year turns, the celebration does not end as friends and co-workers come together once again for the shinnenkai, celebrating the beginning of the new year. At this time of year, it can be hard to get a table in many izakaya-style restaurants due to the large numbers of bo-nen-kai and shin-nen-kai held.

Nen-ga-jo are greetings cards sent to friends and acquaintances at New Year. They are pre-paid postcards in a variety of printed designs. From mid-November onwards, it is common to see them on sale at stalls outside stations and in shopping areas. While traditionally adorned with images representing the Chinese zodiac of the new year, it is increasingly popular for people to have them custom-made according to their specifications using photos taken during the year.

Once the address of the sender and recipient are written in, there is very little space for a personalized message, and most people limit themselves to one or two lines squeezed somewhere between the photos. If there has been a passing of a family member during the year, cards will not be sent out of respect for the dead. In this instance, a family member sends a postcard called mochū hagaki to inform friends and relatives. Soba, or buckwheat noodles, are eaten throughout the year, both hot and cold. However, it is customary to eat a bowl of hot soba noodles as the final meal of the year on New Year’s Eve. This tradition has existed for at least 200 years and is observed by over half of the population.

Also called “year-crossing soba.” this is a traditional dish that serves a practical purpose in kitchens that have been cooking difficult traditional meals for days on end. It is considered unlucky by many to leave any toshi-koshi soba uneaten if eaten during that last meal of the year.

This is a soup that is eaten after the start of the New Year. This tradition apparently began around 600 years ago in order to use up mochi (rice cakes), which had been offered up to the gods on New Year’s Eve. While ingredients and flavors vary between regions, the soup usually contains root vegetables (carrot, daikon radish), an aromatic leaf called mitsuba, shiitake mushrooms, and mochi.

Mochi, which is soft and glutinous, is renowned for easily getting stuck in the throat, and every year people, usually elderly, choke to death while eating o-zoni. The details of these deaths are often posted in the New Year editions of local newspapers

This is a type of food that was traditionally made before the turn of the year, stored in lacquer boxes and then consumed throughout the first few days of the year, thereby allowing the women of the house to take a break from cooking. There is a large variety of foods found in a box of o-sechi, such as sweet egg roll, black beans, boiled shrimp, mashed sweet potatoes with chestnuts, and each has a special meaning.

Since making the whole variety of foods would be a challenging and time-consuming undertaking, it is commonplace for people to order o-sechi from department stores or even convenience stores instead. If you are staying in Japan over New Year and feel like sampling o-sechi, please note that the cost of one box is at least JPY 10,000. You may find, however, that one box is more than enough, as o-sechi is not the kind of Japanese food that is generally enjoyed by non-Japanese.

Hatsumode describes the first visit to a shrine of the New Year when people go to pray for health and good fortune for the year ahead. This visit can be made at any time during the first few days of the year, but it is most common for people to either stay up and visit a shrine in the early hours of January 1st or go at some time later that day.

Those visiting a shrine as the new year turns will be treated to the tradition of bell ringing. Buddhist temples all over Japan ring their bells a total of 108 times to symbolize the 108 human sins in Buddhist belief. Following these bells, worshipers may queue up to ring the bell themselves. While some people will make the trek to a famous shrine or temple in their region, or to the one their family traditionally went to, most people will visit the shrine down the street.  There is no special reason, besides maybe to eat from the food stalls that spring up for the occasion at the more significant shrines, to go out of your way.

Here are some options around Japan:

Read more about: Hatsumode in Tokyo – Shrines to Visit for New Years

Read more about: Hatsumode in Nagoya – Shrines to Visit for New Years

Read more about: Hatsumode in Kobe – Shrines to Visit for New Years

New Year’s Day is a particularly happy time for children who receive envelopes of cash from relatives. The amounts in these envelopes, called pochibukuro or otoshidama-bukuro, may vary depending on the child’s age, but amounts exceeding JPY 10,000 are not unusual.

This tradition dates back to the Edo period when wealthy families would give out small bags of mochi rice cakes and mandarins to encourage the season of good cheer. It is traditional to start the new year with a clean house, and efforts are made to set things as right as possible to start things off on the right foot.  This means not only the cleaning of windows, and tile grout, etc., that you might be thinking of, but also replacing worn items like tatami flooring or the paper in shoji windows.  That one bowl with a chip in it?  Maybe its wabi-sabi, or maybe it is time for a new one! One of many year-end dilemmas people face annually.

Japanese new year traditions are unsurprisingly full of symbolism, and decorations are no exception.  While not Christmas lights and inflatable Santa’s, these items are an important part of the Japanese holiday season. To start with, the “kadomatsu” sort of look like decorated potted plants, but are yorishiro, or objects capable of attracting spirits.  These are set out in pairs in front of homes to welcome the spirits of the family’s ancestors. Kadomatsu vary by region but are typically made of pine, bamboo, or other local fauna.

Other decoration options are the “manekineko,” or beckoning cat,  and the “kumade,” which is a rake (though it is sometimes hard to tell!), but both items are said to bring good luck into the home.  Finally, the “kagami mochi,” or mirror rice cake, is extremely common. It consists of two mochi rice cakes placed on top of each other with an orange, with an attached leaf, on top of that. 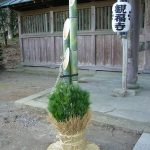