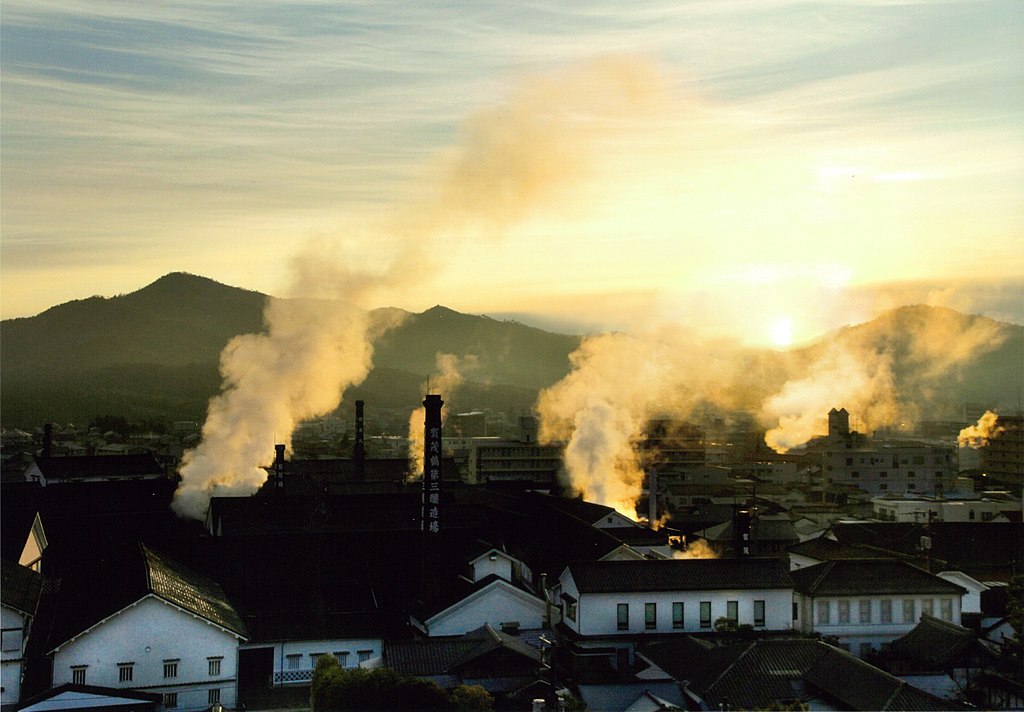 If you’ve only recently moved to Hiroshima, you may not yet be aware that you are in one of Japan’s three great centers for sake production, the other two being in Kobe and Kyoto. Of the three, Hiroshima is both the youngest and, by some metrics, the most innovative.

Until the end of the nineteenth century, the soft, mineral-poor water of the Hiroshima region was considered unsuitable for sake production, because local wells and streams undernourished the “koji” mold that replaces yeast in most east Asian fermenting. As elsewhere, there were “jizake” brewers turning out what they could for the local market, but none of them were making a drink you’d want to bring home as a souvenir.

All of that changed sometime around 1887 when a local brewer named Senzaburo Miura worked out a new method for soft-water brewing. By carefully cultivating his koji until it had spread deep into the core of the rice grain, and then fermenting his mash slowly and at temperatures below those used traditionally, Miura was able to produce sakes that could compete with the very best. By 1907 these new “ginjoshu” style of Hiroshima sakes were winning national awards, and from there the region’s reputation developed quickly. In 1995, when the National Research Institute of Brewing was seeking to relocate from Tokyo, they chose Higashi-Hiroshima over both Kyoto’s Fushimi district and the Nada area east of Kobe.

With eight breweries within easy walking distance of one another, Higashi-Hiroshima is the center for Hiroshima’s sake brewing and hosts a large sake festival each October. The white-walled brewery district is a fun destination year-round, either for a full tour of one of the facilities or just a stroll through their showrooms, tasting as you go.

But the possibilities don’t end there. Many other breweries around the Hiroshima area are doing exciting things. Let’s start with the Imada Sake Brewery in Akitsu-cho, east of Kure. Technically part of Higashi-Hiroshima, Akitsu is a small port city famed for its potatoes, oysters, and sake. Imada brewery is owned by Miho Imada, the third generation owner and also it’s master brewer, or “toji,” one of only 20 or so female toji among some 1,000 breweries across Japan. From all accounts, she takes an almost religious approach to her work, insisting that to truly understand local sake one needs to be familiar with the land and the Seto Inland Sea that help produce it. Almost single-handedly, she rescued a local variety of sake rice called hattansou from near extinction, using it in her industry award-winning Fukuchu daiginjo sake, which received its name directly from the Senzaburo Miura mentioned above.

Closer to Kure city, the small island of Ondo, accessible by bridge, is home to Enoki Shuzo Brewery. Among their other offerings, Enoki Shuzo was the first brewery in modern times to successfully create “kijoshu,” an extremely rare expression made by fewer than thirty breweries across Japan. Crucially, kijoshu is brewed in a final step with sake instead of water and then aged. Enoki’s Hanahato Kijoshu is aged for a full eight years, resulting in a rich, dark drink that is unlike any other sake you’ve tasted. In addition to drinking, the brewery recommends pouring it over vanilla ice cream and using it in sukiyaki to add new depth to an old favorite. The brewery has an onsite shop, and also offers tours if you book in advance.

If you’d rather stay downtown, you’re in luck. Yamatoya Sake Shop, a short walk from Mitsukoshi Department Store, carries an insane array of sakes from across Japan, and an especially good selection of local offerings. The owner and his staff are knowledgeable and enthusiastic, and between the sakes, the wines, and other liquors and related goods on sale, the chances are slim that you’ll be walking out empty handed. Want to make things even easier? On May 29, Yamatoya will hold its 14th Sake Festival in Alice Garden, just south of Parco at the east end of the Hondori shopping arcade. Around 100 carefully selected sakes from across the country will be on offer, and with an advance ticket, you’re free to do your best to try all of them. You can also turn up on the day itself and buy a ticket letting you sample any five that catch your fancy. It’s a popular event and lots of fun.

Access: Tours presently unavailable. Sake available in local stores (including Yamatoya, below) and directly from the website.

Access: From downtown Kure, take route 487 to Ondo-cho. Once you’re on the island, take a right at the third set of traffic lights. The brewery will be on your left after a little over 100 meters.

Access: From the main entrance to Mitsukoshi Department Store, walk east parallel to the streetcar line. Take the second right (not under the large arch welcoming you to Nagarekawa). Yamatoya will be on your right.

Additional Information: 14th Nihonshu Sansan Sake Festival will take place on May 29 at Alice Garden. Advance tickets (available from the store beginning April 25) are 2000 JPY, or 1500 JPY if you are 20-25 years old, and give you a ceramic cup and access to all sakes. Same day tickets are 500 JPY and let you try any five varieties.