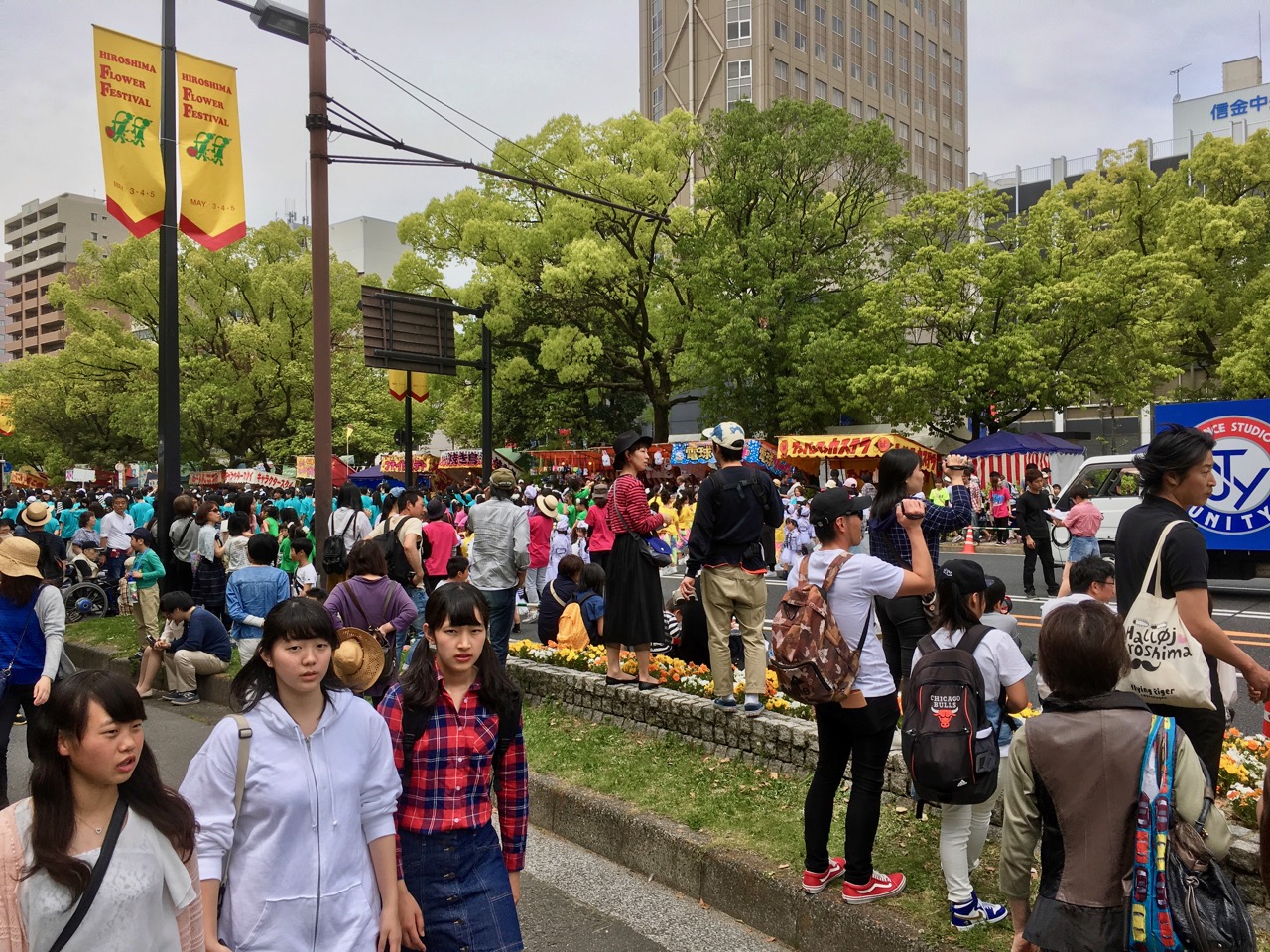 If you’re looking for something to do in Hiroshima over Golden Week, why not consider dropping by the 42nd annual Hiroshima Flower Festival?  Each year Hiroshima’s Peace Boulevard is closed to traffic and, for the three days of the festival, is used for parades, dancing, music and food stalls to entertain nearly two million visitors who throng to the city.

The Festival was conceived in the wake of the victory parade held for the Hiroshima Carp following their 1975 Central League Championship. The first Hiroshima Flower Festival was in 1977, and in the decades since it has grown into Hiroshima’s largest event.  The theme for the original Festival was:

In subsequent years, the announced “theme” has continued to focus on flowers. In 2018, 890 entries were accepted from 26 prefectures. The winner, from a 62-year-old resident of Fukuyama, is “A Message to the World of Flowers and Peace.” The festival will include 28 stages, with performances from 243 artists and organizations, including this year’s special guest, the girl’s acapella group “Little Glee Monster.” Elsewhere, performances will range from pop and rock acts to stand-up-comedy and belly-dancing. In the evenings, traditional kagura performances and other concerts are held.

Along the streets, a bewildering array of stalls and attractions will run throughout the day. In addition to standard Japanese festival fare, past trips have turned up stalls selling tacos, Bulgarian rosewater, Tibetan Buddhist devotional items, Turkish kebabs and piles of Malaysian noodles. Many areas are devoted to hands-on activities for children. Craft beer corners, flea market stalls, bouncy castles and, in some years, pony rides stand side by side with booths manned by earnest young people promoting organizations and activities devoted to the full spectrum of social and environmental causes.

And of course, there are the parades. On May 3rd, things kick off with the Flower Parade, in which nearly 9,000 people will walk, dance, march and ride atop floats down the length of Peace Boulevard, including the newly chosen Flower Queen and her entourage, demurely waving to the crowds. Two days later, on the 5th, over 5,000 dancers representing about 90 dance troops will fill the Boulevard for the Yosakoi parade, an especially energetic form of dance that benefits from the presence of college dance teams led by leaping young men and women in bright costume.

And the best thing? In eighteen years of attending the Flower Festival, I’ve never once spotted a clown.

But let me offer a suggestion. The crowds can be oppressive, especially during the parades. If you find a place you like, with a nearby stall or two selling food and drink you enjoy, settle in for a while rather than trying to push up and down the length of the Boulevard. You have three days, and the quieter afternoon hours, to try to take everything in. Some places, like the craft beer area and the larger performance stages, become separate enclaves, with their own particular atmosphere. Consider joining one of these for an hour or so, and let the mood carry you along. And enjoy yourself!

When: Three days of May 3-5, morning to night