Hatsumode in Tokyo – Shrines to Visit for New Years 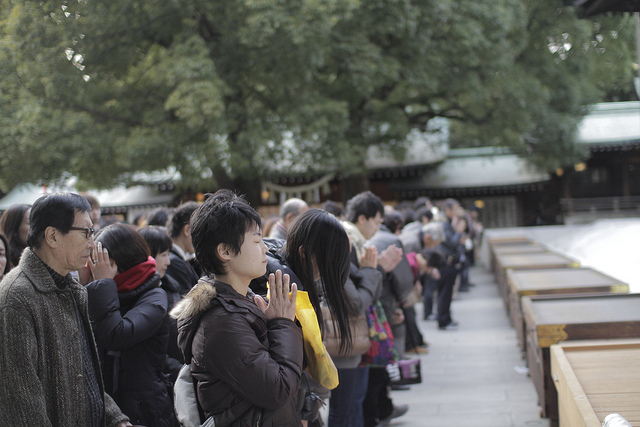 Hatsumode in Tokyo – Shrines to Visit for New Years

Celebrating New Year in Japan is all about ‘firsts.’ Perhaps the most important ‘first’ is the first trip to a shrine, a tradition called hatsumode. While this can be done at any time, usually over the first three days of the year, the most dramatic time will be at midnight on December 31, when crowds will gather to hear parishioners ring the temple bells and pray.

As one of Japan’s top three shrines, Meiji is the most famous shrine to visit for Hatsumode and attracts over 3.1 million people over the first three days of the year. In recent times it has been considered a power spot, from where pilgrims can draw power for the coming year.

As can be expected, with so many visitors, people queue for hours for their first prayer, though many do not wait to get to the front of the queue, instead of tossing their coins far over people’s heads to make their ritual donation.

Asakusa Shrine is one of the 840 important shrines in Japan and is another popular hatsumode spot. In previous times the Sensoji temple closed its doors on New Year’s Eve, only opening them at midnight. However, as the temple has grown in popularity, this practice has been discontinued to protect the thronging crowds. At midnight parishioners ring the joya-no-kane (New Year bells) 108 times, and amulets go on sale to promote good luck for the coming year.

From January 1 to 6, a Buddhist ceremony called Shushou-e is held to pray for good luck and happiness in the coming year and to drive out evil spirits

According to Japanese legend, at New Year, foxes from all over Japan dressed in human form and visited Oji Inari Jinja. The legend was so strong that not only was it painted by Ukiyo-e master Utagawa Hiroshige, but it is still celebrated to this day, with the hatsumode Oji Kitsune-no-gyorestu Fox Parade.

Begun in 1993, the parade is an annual New Year’s Eve event at which people gather from 9:30 pm with chochin lanterns representing the light of life and hope, and wishing for the sound growth and happiness of the children. Fox masks are worn, children’s faces are painted, and stalls sell fox alcohol. 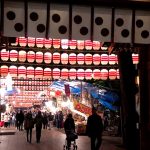 Not to be outdone is the nearly 2,000-year-old Okunitama shrine in the western Tokyo suburbs. Over half a million people make their first temple pilgrimage here every year.

If you’re up for it (literally), you can check out the Hatsu taiko ceremony, where three beats of the first drum sounded off in the shrine at exactly midnight on New Year’s Day, which is said to ward off sickness and evil for all those within earshot.