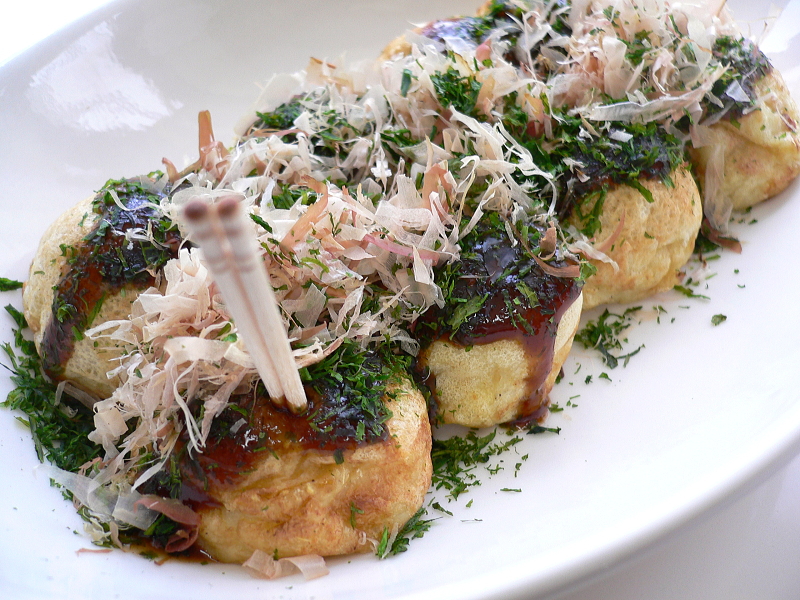 There are plenty of street food outlets across Kansai for those looking for food-on-the-go. Street food gives you the chance to sample some tasty dishes unique to the region, all at pretty reasonable prices. Here is a selection of top bites to look for.

The quintessential Osaka street snack, takoyaki, is made of grilled octopus balls. They are coated in a batter made from flour, eggs, and dashi soup stock. The octopus filling usually contains a twist of ginger and spring onion.

You will find stalls selling takoyaki across Kansai, but particularly in Osaka. They are usually served in a small tray and come topped with a sauce (you can generally choose from a few), fish flakes, and dried seaweed. As well as octopus, you can also find takoyaki containing other fillings such as cheese or bacon at many outlets. Consume while hot!

Another Osaka favorite, okonomiyaki is made with a batter similar to that used for takoyaki only with the added ingredient of shredded cabbage. The mixture is cooked on a grill with ingredients of your choice added. Okonomiyaki translates as “grilled as you like it,” and that really is the case – you can have it cooked with meat, vegetables, seafood, or even cheese.

Okonomiyaki is round, similar to a thick pancake or omelet. As with takoyaki, you can garnish it with sauces, fish flakes, or dried seaweed. There are regional variants of okonomiyaki, for example,negiyaki, which includes green onions instead of cabbage.

Sushi and sashimi are among Japan’s most popular and well-known foods. Kansai has its variations that you will find served in restaurants and at street stalls across the region. One such type is hako-zushi (box sushi) that is pressed into a square and contains seafood such as mackerel or shrimp and topped with vinegared rice.

Sashimi – thin slices of raw fish or meat usually served with soy sauce – is a great bite to eat if you’re on the move. Popular varieties include salmon, squid, and octopus.

If there is a rival to sushi in the battle for most famous Japanese culinary export, it’s probably ramen. There are variations in almost all regions of Japan, with each taking the standard noodle and broth base and adding its own twist. You can find street food stalls selling localized varieties of the dish throughout Kansai. One of the most notable is Wakayama ramen, which is particular to the Wakayama Prefecture. It consists of a pork bone and soy sauce broth that has a thick, hearty consistency that both fills and warms you up in winter.

Kushikatsu comes from the Japanese words “kushi” (skewered) and “katsu” (deep-fried in breadcrumbs). This pretty much sums up this snack food, which is half a dozen or so skewers of deep-fried, breadcrumbed meat, seafood or vegetables served with a dipping sauce (the ponzu sauce is a local favorite). Kushikatsu is another street dish that originated in Osaka. It is a popular accompaniment to a late-night beer.

The Kansai region is famous for its beef with the city of Kobe taking top honors in this regard. Yakiniku is barbequed beef sliced into bite-sized pieces and served with seasoning, sesame oil, and a dab of sauce.

While yakiniku makes excellent use of prime beef cuts, another common beef street dish is hormone, which is barbequed innards of the cow. This is also served with sauce and seasoning. It may not sound too appealing, but it’s a commonly consumed street dish enjoyed by locals and tourists alike.