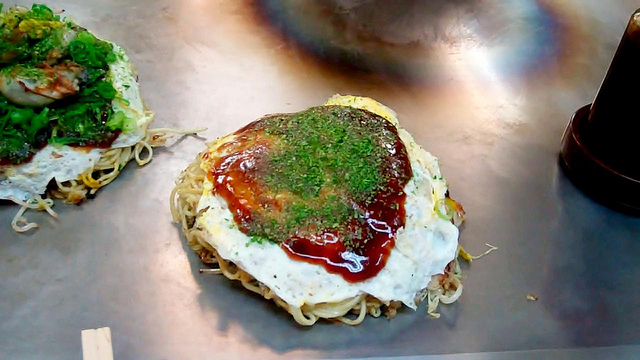 Most cities in Japan can boast exquisite and marvelous food, and many of them are rightly vaunted for it. Hiroshima, for all its international fame, is not one of them, and this is somewhat unfair in our opinion. Hiroshima cuisine is diverse and exciting and, most importantly, it is delicious.

Perhaps the best-known food of Hiroshima is its style of okonomiyaki. Of course, okonomiyaki – sometimes described as Japanse pizza or Japanese omelet – is most readily connected with Osaka, but many people cite the Hiroshima style, sometimes known as Hiro-yaki, as the most popular. The dish is cooked on a griddle and contains masses of cabbage, bacon and soba noodles sandwiched between layers of fried batter. Various toppings include mayonnaise, cheese, okonomiyaki sauce, eggs, and dried bonito flakes. A great place to find it is in Hiroshima’s Okonomimura – okonomiyaki village – where there are four floors of equally great restaurants from which to choose. With a history reaching back to the 16th century, Hiroshima prefecture’s oyster farming is responsible for 60-70% of Japan’s haul, so it is no surprise that ‘kaki’ is so popular here. Oysters fished in Hiroshima are large and plump, and are sold internationally as well as all across Japan with the springtime seeing large oyster festivals held in Tokyo and Nagoya. While in the west we expect our oyster to come raw, preferably on the half-shell and served with champagne, the Japanese take a far more prosaic, though extensive, attitude to the shellfish. Kaki-fry (deep fried) and kaki-don (baked and served on a bowl of rice) are the most likely way to find them served. If anyone was to ask you if you ‘like Hiroshima men’, they would probably be talking about Tsukemen. Possibly best described as ‘ramen’s strange cousin’  Tsukemen’s noodles are served cold in a dish separate from the broth with the intention of dipping before eating. The broth itself is served on an increasingly spicy scale chosen by the customer from one to five and so, if you take too many noodles at one time, the flavor can become a little overpowering. Dipping just two or three noodles in one go is advisable. Other ingredients include pork, eggs, cucumber, and cabbage among others. If noodles are your thing, it is worth a trip out to Onomichi in Hiroshima Prefecture which among other things is famed for its Onomichi Ramen. Very similar to the soy sauce, or ‘shoyu’, ramen that you can find elsewhere in the country, there are perhaps two things that set the Onomichi style apart: one is the extra helpings of glutenous fat known as ‘seabura’ that, while sounding a little on the unappetizing side, actually enhance the flavor dramatically more than you will find with most shoyu ramen. The other is the heat at which it is served, in that it is scalding. Don’t be taken in by the little steam coming from your soup; this just means that the heavy layer of oil (thanks to the seabura) is retaining the heat. Proceed with caution.

Branching out from Onomichi are the islands of the Seto Inland Sea and, apart from the abundance of citrus fruit, this means primarily one thing: seafood. The Seto Inland Sea is one of the most productive seas in Japan supplying seafood specialties to the area including grilled eel for Miyajimaguchi, octopus for Mihara, and a shark called ‘wani’ for northern Hiroshima.

If anyone you know has visited Itsukushima shrine on the Hiroshima island of Miyajima, there is a good chance that they will have given you a souvenir of momiji manju. Manju, a cake made of a boiled dough pastry, are found all over Japan and are usually filled with red bean paste or flavored with Japanese green tea. The momiji manju of Miyajima are different in that, as their name suggests, they are not only shaped like a maple leaf, but have some of the flavor too. Created in the early 1900s to celebrate a local maple leaf viewing spot, they now come in many flavours including chocolate, cheese and custard.

Tsukemen image by City Foodsters [CC BY 2.0], via Wikimedia Commons