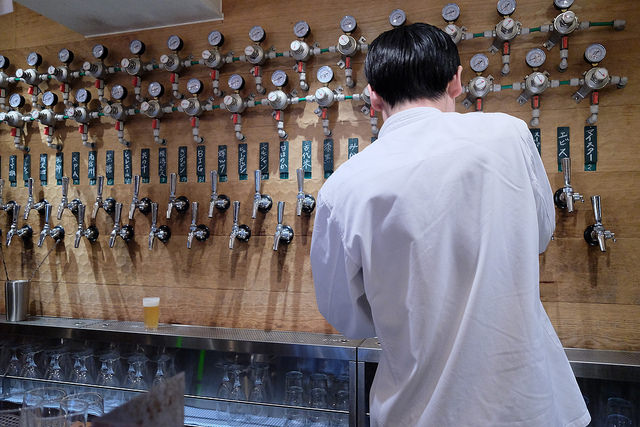 While Asahi and Kirin beers are world renowned, it could be argued that, along with Sapporo, they do not have the most exciting tastes. As such, expats often have somewhat justifiable cause to pine for the beer of their homelands. While there are the usual chains of British and Irish bars all over Tokyo, these still tend to sell the same big three Japanese brews.

However, in recent times craft beer has made important inroads in the capital. As more discerning drinkers search out a more flavorsome pint, various brewpubs are springing up. While it is impossible to highlight all here, below you can find some of the more heralded places in Tokyo.

Wateing Hole in Yoyogi is much vaunted by those in the know, particularly those from round the More Than Relo offices. In 1998, Ichiri Fujiura became the first non-American to win the Homebrewer of the Year award (something of a bittersweet victory, considering it aroused questions from the Japanese constabulary in this nation where homebrewing is not strictly legal). After his brush with the law Fujiura went on the straight and narrow and opened this cracking bar with its own ‘nano’ brewery. There are 21 draft microbrews (a couple of them hand-pumped) from Japan and overseas that are updated every day and hand written above the bar (as well as updated on the website), meaning you should never be short on choice. The bar staff are incredibly helpful, and as some speak English they should be able to help you select beers based on your preferred taste. This split-level bar was the Scottish brewery’s first dalliance into the Eastern market. You may know Brew Dog for their famous Punk IPA and Libertine Black Ale, but there is so much more to sample. There are twenty taps, ten of which are their own beers including four special editions.

Food is also a big thing, and to perhaps compliment the Punk IPA they have brought in a chef who has cooked for Johnny Rotten as well as the Emperor of Japan.

The first Devilcraft bar opened in Kanda in 2011 and, while its range of 15 beers were considered to be of very high quality, it is possibly their pizza that has most people talking. While Italian restaurants do a relatively passable pizza in Japan, the deep dished Chicago style pizza is not seen all that often. However, when people from the Windy City repeatedly tell you how great it is, it’s time to sit up and take notice. The sister bar in Hamamatsucho opened in August last year with twenty-two taps and replicated the same world wide craft beers and Chicago pizza winning combination.

Despite being just a stone’s throw from Tokyo Station, this classy little pub, if you time it right (i.e. when it isn’t packed with salarymen) can be a haven of quiet amongst the hustle and bustle. Niigata prefecture’s Swan Lake is one of the most famous craft beers around, and with good reason. There are 30 taps here offering good stuff from all over and while some of the guest beers can get a little bit pricey, their own excellent brews are well priced at 980 JPY for a UK pint (568ml).

While the food selection is nothing to shout about, the winner of The Japan Beer Times’ 2013 Best Bar award, has long been considered the number one place for a top tipple in Tokyo. With a mind-blowing 70 beers on tap, it has to be said that if you are tired of Popeye, you are tired of beer. The owner Aoki Tatsuo, something of a celebrity in Tokyo craft pub circles, spends less and less time on site. Still, it is a testament to his wonderful staff that waiting times are kept to a minimum, the atmosphere is always cheerful and you are always tempted to try something new from the mostly Japanese range of beers. Baird Brewing started as a two man (well, one man and one woman) organisation in Numazu in 2000, but its success has helped it expand across the country. The first Tokyo branch opened in Nakameguro in 2008 with another in Harajuku following a year later, and each has its own distinct style. The former has a distinctly American vibe selling New Haven-style pizza. It also boasts 26 taps selling a mix of their own microbrew and imported beers, as well as four hand-pull real ale pumps. The Harajuku branch is heavily influenced by izakaya and serves Japanese food such as kushiyaki and an interesting Shimaguni stout edamame. However, the beers are still very much their own with 15 taps selling Baird beers along with two hand pumps, one of which supplies the house Harajuku ale.

If you want to get as far away as possible from the fizzy yellow beer of Japan’s lager industry, Hatos Bar is most definitely for you. Stocking only beer with the fullest of flavor, this isn’t stuff to be knocking back, but instead for sipping appreciation. As well as great beer, as the first place in Tokyo to sell authentic pit barbecue, the food is causing something of a storm in Nakameguro. It has a laid back vibe with hip ghetto-chic decor, and this combined with the beer and the pulled pork has meant it has become a huge hit with the Tokyo ex-pat community.

Coming from the guy who brought you the Goodbeer online retailer, Goodbeer Faucets is a shiny chrome and concrete bar which really knocks what your preconception of what a craft beer bar should look like. It has 40 different taps of draft and three ale hand pumps on the go serving beer predominantly from the US and Japan as well as their own brews. Happy hour sees 200 JPY off a pint.

Drinking craft beer can be an expensive game. Not so at Craft Beer Market. Here you can find up to 30 different craft beers at just 780 JPY for a US pint or 480 for a glass. Of course at these prices there isn’t much in the way of imported beers, but in fairness the Japanese craft beers they do serve – including weizens, IPAs, seasonal beers, stouts, and even barley wine – are all top notch. With locations all over the city, the food is raved about and menus come in English, so it makes it a great place to pop in for after work.

Shinshu Osake Mura (literally ‘alcohol village’) is a paean to all things Nagano. Fortunately Nagano has some of the best craft beers in the country. Unlike Goodbeer Faucets and Craft Beer Market, this is by no means one of the craft beer behemoths (and strictly speaking it is actually a sake bar). However, what it lacks in diversity it makes up for in a selection of great Nagano beers in cans and bottles – from Shiga Kogen to Oh!La!Ho! Brewing to Hotaka Beer. While these beers aren’t exactly rarities, they can all be picked enjoyed at wholesale prices, most of which are cheaper than you can find in the shops. If it’s in season try to find the Apple Hop by Minami Shinshu Beer. Great stuff.

Image by Hideya HAMANO (Own work) [CC-BY-2.0] via flickr.com

Image by Omid Tavallai (Own work) [CC-BY-2.0] via flickr.com

Image by Richard Giles (Own work) [CC-BY-2.0] via flickr.com