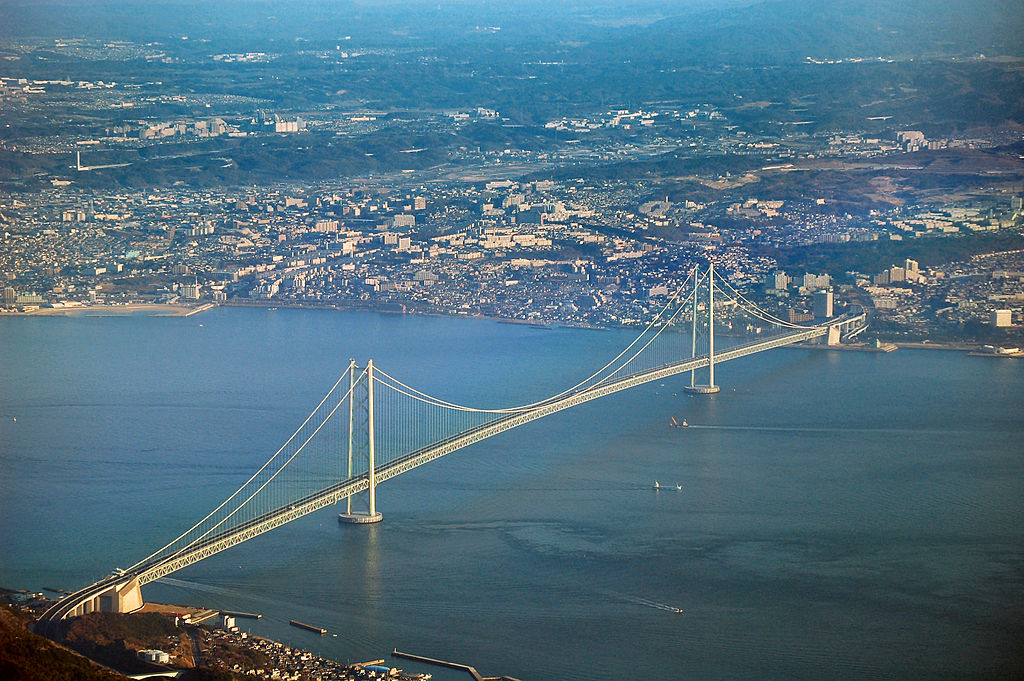 In a world where construction projects grow higher, longer and bigger by the day, the Akashi-Kaikyo Bridge is practically a dinosaur. The world’s longest suspension bridge is now 18 years old. The bridge actually requires three spans to cross the Akashi Strait and link Kobe and Awaji Island in Hyogo Prefecture. The total length of the Pearl Bridge, as it is more commonly called, is 3911 metres with a central span of 1991 metres.

The Crown Jewel of Japanese Engineering

The Akashi-Kaikyo Bridge was over ten years in the making and is still considered the greatest engineering feat in Japan. The obstacles in its construction included strong tidal currents in the inland sea, winds that can whip through the strait at speeds over 60 metres a second and the omnipresent possibility of earthquakes. The solutions to these problems involved newly developed technologies by the Japanese builders.

The world’s largest wind tunnel was constructed to test the bridge design which included a central span that was twice as long as any previous suspension bridge. Nature tested the massive foundations built in waters up to 60 metres deep when the Kobe earthquake struck on January 17, 1995. The towers stood strong but they moved apart by about one metre which required an audible to be called on fabricating the bridge’s girder length.

Designers built the Akashi-Kaikyo Bridge to last 200 years. The techniques employed can be used to build bridges with spans up to 2,500 metres but so far no such bridges have been constructed.

Why such a bridge?

The Akashi strait is one of the busiest waterways in Japan, with some 1400 ships a day passing between Osaka Bay and the Seto Inland Sea. Until the Akashi-Kaikyo Bridge many of those ships were ferries transporting passengers and vehicles. In 1955 two of those ferries sunk in a storm at the cost of 168 lives. After that the Japanese government began making plans for a suspension bridge across the strait.

So as not to impede the important shipping channel, the bridge had to be constructed with a 65-metre clearance over the sea. The resulting towers to make this happen soar 300 metres above the waves.

Other than driving across, there are several options for enjoying the Pearl Bridge. Maiko Park on the waterfront at the foot of the bridge features a walking path on a concrete seawall that winds into a pine forest and includes the one-time residence of Sanji Muto who founded Japan’s first newspaper advertising agency and then descended into politics. Also here is Sun Yat-sen Memorial Hall, an octagonal frame building that is dedicated to the life and works of the founding father of the Republic of China. It is the only museum in Japan marking the Chinese revolutionary.

You can also go on a guided tour of the majestic bridge that takes you along grid deck maintenance paths 50 metres above the water and culminates in a lift ride 98 stories to the top of the 300-metre Akashi-Kaikyo Tower for a view across Osaka Bay and seemingly most of Japan. Participation is limited and reservations are required. If you want to learn about the relevant background of the bridge you will have to know Japanese but for the most part the Pearl Bridge speaks for itself.