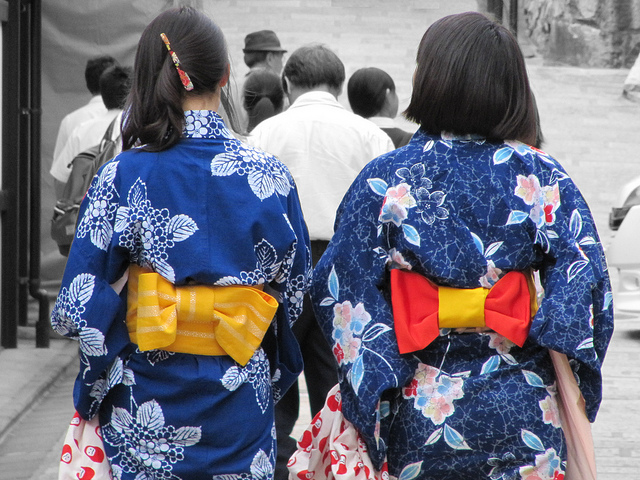 If you have ever been to a summer fireworks festival around Tokyo you may have noticed many people wearing traditional Japanese dress and wondered what was going on. Well, summer festivals are a time when Japanese and foreigners alike can wear yukata, a summer, and informal variant of the famous kimono.

The word ‘yukata’ means ‘after bathing’, as they are the clothing that is often worn after onsen or sento in traditional Japanese ‘ryokan’ hotels. However, in the hot summer months, these unlined kimonos are worn by men, women, and children particularly when celebrating hanabi.

Yukata are usually made of either cotton or synthetic fabric, being cooler than the silk of traditional kimonos, and are made up of three main aspects: a ‘juban’ cotton undergarment, the yukata itself, and an ‘obi’ belt that ties it together. On the feet wooden sandals called ‘geta’ are worn and to carry personal goods including cell phones, both men and women carry small bags called ‘kinchaku’.

For a basic, easy starter kit you can find yukatas in discount clothing store UNI QLO all over the city that are pretty easy on the pocket. You can even buy full yukata sets including obi and kinchaku. However, when the store’s range changes from summer to autumn in late July/early August yukata are one of the first things to go. Get in there quickly.

Having been around since the Edo era, Chikusen is the oldest yukata and kimono provider in Tokyo. Famed for their unique dying patterns that no other yukata makers are able to replicate, they are beautiful and traditional like no other makers in the city.

Sakaeya is a family business in the heart of Shinjuku and it is ideal for those of you who are looking for traditional yukata that won’t break the bank. At Sakaeya they deal in rental kimono and yukata, and while prices tend to be around 6,000 JPY, if you spend 10,000 JPY they will include dressing assistance and a tea ceremony. Appointments are imperative.

If you want something that is a little edgier, Shibuya’s Tsukikageya is the unconventional store of choice. Mixing a little bit of the traditional, with a huge helping of controversy, this is where the cool kids will be shopping this summer. As of July this year, they have opened a pop-up shop in Harajuku’s Laforet.

It’s pretty hard to miss the vintage clothing store Chicago, also in Harajuku. Its loud neon sign isn’t something that you would readily associate with the simple beauty of kimono, but in fact, they have rack upon rack of second hand and vintage yukata, perfect for this summer’s festivals. There are also chains elsewhere around the city.

If you are unable to get to the shops to buy your summer yukata, these online stores have extensive ranges.

How to wear Yukata

Follow these simple guides for putting on your summer yukata.