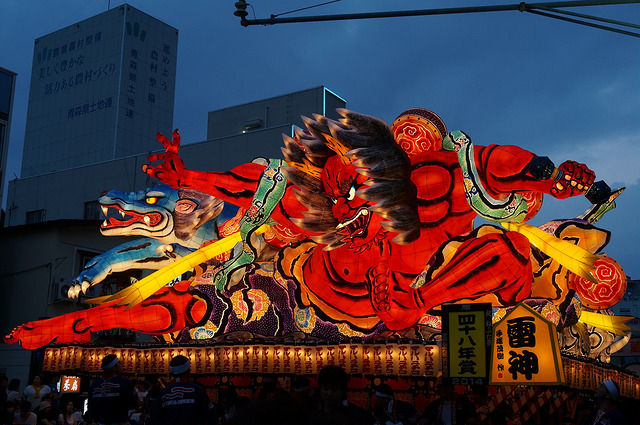 Throughout July and August there are festivals all over Japan celebrating all manner of things – from the literal star-crossed lovers of Tanabata to the returning of deceased ancestors at Obon. However, for the citizens of Aomori Prefecture, August is a time to celebrate warriors of the past.

‘Nebuta’ festivals, in which giant floats of samurai warriors are dragged through towns, are held right across the prefecture, but by far the biggest is Aomori Nebuta Festival. Held in the prefecture’s capital, it is an all singing, all dancing, all drumming, all excitement festival that is so big that it is makes up one of the Three Great Tohoku Festivals (along with Akita’s Kanto Matsuri and Sendai’s Tanabata Matsuri).

As tends to happen with these ancient cultural events, there are a number of stories explaining the origins of the Aomori Nebuta Festival. The most likely is that it simply springs from Shinto tanabata rituals and has grown over the years. However while that explanation may have the largest grain of truth to it, it’s not quite so exciting.

A tale that perhaps does live up to the frisson of the festival, the one that is most widely circulated, is that the festival originated as a reflection of the flutes and ‘taiko’ drums used by the great warlord and future shogun, Sakanoue no Tamuramaro, to attract the attention of the enemy during a battle in Mutsu Province. Unfortunately, as it is unlikely that Tamuramaro actually conducted military expeditions in what is currently Aomori Prefecture, this explanation can probably be discounted. Another explanation that has a little more gravity – and even more brutality – is connected to the etymology of the festival’s name, ‘nebuta’. Following his defeat at the hands of Sakanoue no Tamuramaro, rival warlord Aterui was beheaded and his followers were condemned to death, forced to dig large pits before being buried alive, with prisoners stamping the dirt down.

It is believed that the word Nebuta (written “根蓋” in kanji) comes from this grotesque act, as Aterui’s followers were returned to their roots, or to the world of the dead (根) with the dirt as a covering (蓋). According to this legend, the ground was stomped while carrying the float of Sakanoue no Tamuramaro on their shoulders, dancing as they did so.

What happens at the Nebuta Matsuri?

While this tale is less than jolly, today the festival is joyously celebrated by around three million revelers between August 2 and 7 every year.

Over the year leading up to the festival, local teams or companies construct the 24 floats from painted washi paper over a wire frame and, they can be up to nine meters wide and five meters tall. The floats often depict gods or tales based on kabuki or mythical stories. Each night of the festival (except on the last day, when the parade is held in the afternoon) the floats are paraded by the teams through the streets of Aomori. The floats are dragged, weaving too and fro, and spun for the excited crowd. Each float is joined by teams of taiko drummers and flautists, as well as hundreds of dancers, stamping and chanting “rassera, rassera” as they do so.

Participating in the festival

The dancers, called ‘haneto’ by locals, are not restricted to the teams who built the floats. In fact, anyone can join in. All it takes is the wearing of the haneto dress, which can be rented for approximately 4,000 JPY. For further information on how to take part, check out the website here.